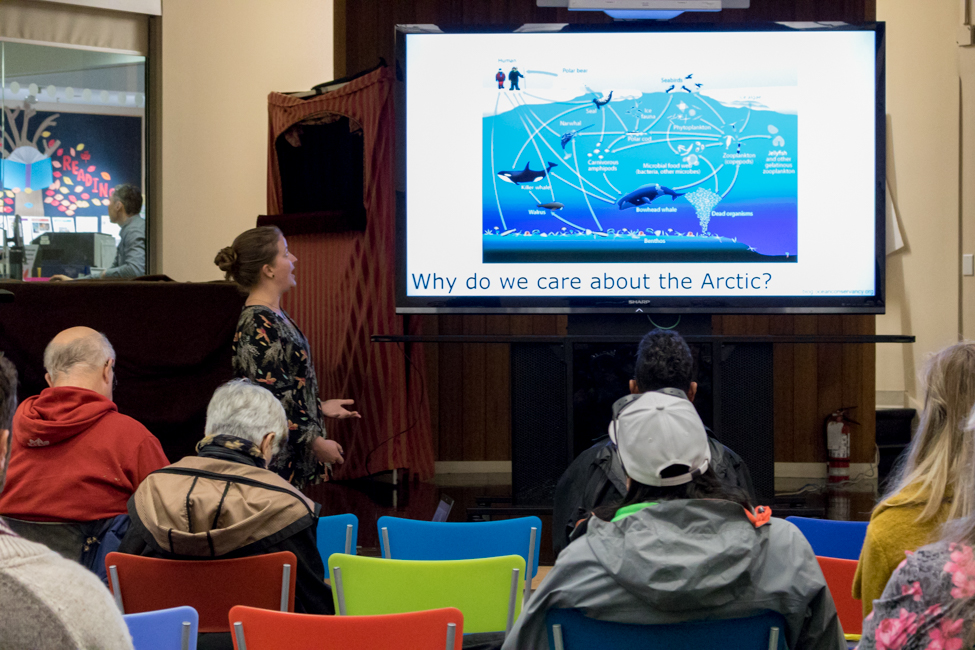 Read the story here or below

The use of flame retardants is a social justice issue, an environmental chemistry professor told a small audience at S. Walter Stewart Library on Oct. 2.

As a part of Toronto Public Library’s Our Fragile Planet program series, Young explained the importance of understanding how chemicals move around in the environment and the concern with Arctic contamination.

“These chemicals don’t stay in the products — they get into our bodies and get into the environment, which has an unintended effect,” Dr. Cora J. Young said. “It can influence the reproduction of different animals in the environment.”

According to Young’s website, her research focuses on the development and application of new analytical techniques in order to grow an understanding of issues in air quality, climate change and pollutant transport.

Her research shows they are affecting life in the Arctic region, she said at the library. It shows that the use of chemicals in low-latitude regions increases levels in the Canadian Arctic, she added.

Some chemicals applied to furniture and household items are meant to slow down the spread of accidental fire and potentially save your life at that moment she said.

However, it makes the smoke even more toxic.  Young says the toxins are travelling up to Canada’s northern communities and to those who don’t use these products.

As a result, remote communities in the north now face the most risk of being exposed to these toxic chemicals, Young said. Prevailing winds and currents help flame retardants and other toxins travel to Canada’s Arctic. They have accumulated in the ice and in the people that live there. Those living in these communities have traditional diets and as a result of travelling toxins, they are exposed at a high rate she said.

Large volumes of these compounds started being used in the 1950s and ’60s, she said.

“They also influence hormone regulations, and some of the flame retardants can interfere with the thyroid, potentially causing thyroid disease or thyroid problems,” Young said.

Additionally, nursing babies top the most-vulnerable list, as they are exposed to what their mothers are exposed to, she said. Research shows exposure to these chemicals can lower a child’s intelligence and IQ.

Flame retardants can be found in any furniture containing foam such as a couch, mattress, and office chair, and electronics containing hard plastic such as a TV or computer, Young said. The list also includes baby products like car seats to strollers and even nail-polish, according to a blog published by Environmental Defence.

“A lot of the decisions that are made about these chemicals are made often by whom the politicians are hearing from. So, a lot of times they are hearing from chemical companies, such as the people who make the profit off of selling flame retardants or other chemicals,” Young said. “They don’t always hear from people that may be affected like consumers and people who might be susceptible to different types of diseases.”

Young also said it is challenging to avoid exposure to these contaminants.

“Products that contain them are not always labelled,” Young said.

She recommends individuals to always follow the directions for product use, such as using a non-stick frying pan under the recommended temperature conditions.

Regular vacuuming, cleaning of furniture with a damp cloth and buying flame retardant-free products might help keep you and the environment safe according to Environmental Defence.

“We want to maintain these pristine environments because we want to consider ourselves to be good stewards of the earth,” Young said.

iThere are no comments

Begin typing your search above and press return to search. Press Esc to cancel.